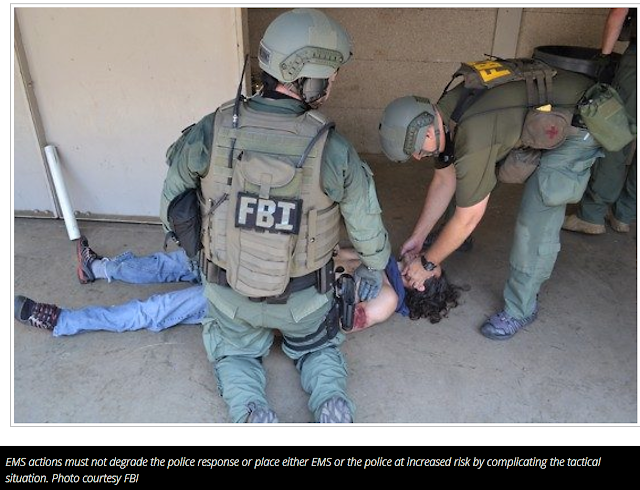 FBI's View to Improving Survival in Active Shooter Events
Mon, Sep 29, 2014 By William P. Fabbri, MD, FACEP
Recommendations and reflections two years after Sandy Hook
An active shooter is an individual actively engaged in killing or attempting to kill people in a confined and populated area.1 Recent active shooter incidents have underscored the need for a coordinated response by public safety agencies to save lives.
As we approach the second anniversary of the Sandy Hook Elementary School shooting, which resulted in the murder of 27 children and adults in Newtown, Conn., it’s sensible to take stock of the lessons learned and actions taken by public safety agencies as a result of that extraordinary tragedy.
A Challenge to Every Community
Mass casualty shooting incidents aren’t new in the United States. The 1966 “Tower Sniper” incident at the University of Texas, Austin, left 14 dead and 31 injured at the hands of a single gunman.2 The 1999 Columbine, Colo., incident was perpetrated by two assailants who killed 13 and wounded 24.3
Since Columbine, active shooter incidents have become more frequent. In the eight-year period after Columbine, an average of five active shooter events occurred per year. Since 2009, that figure has increased threefold.4
While the reason for this increase is unclear, the layperson’s impression that active shooter incidents have become more frequent appears valid. A recent study by Texas State University (TSU) examined and cross-referenced police reports, public records and media reports for the period 2000–2012.5 The increased frequency of incidents seen in the TSU study isn’t explained by changes in case definition or solely on the basis of increased case reporting.
The FBI is actively collecting and analyzing detailed data on these incidents. This ongoing effort is a source of periodic guidance to improve actions to prevent, prepare for and respond to active shooter mass casualty incidents (MCIs).
The TSU study also observed that most active shooter incidents (40%) occurred in places of business including offices, stores and industrial locations. Schools and colleges were the next most common locations for these events at 29%. The assailant moved between multiple locations in almost 20% of the incidents and had no apparent connection to the shooting location almost 50% of the time.
These findings emphasize the need for all communities to develop response plans for an active shooter event. These incidents have occurred in municipalities of all sizes, raising the possibility of similar MCIs occurring without warning in communities with limited police, rescue and emergency medical resources.
From the standpoint of definitive care, another significant finding of the TSU analysis is that the median number of shooting victims was five per incident. This translates to 58 incidents over a 12-year period in which at least five victims were shot. In preparing for active shooter incidents, hospital emergency and surgical departments must address the major challenge of providing timely treatment to multiple victims of gunshot wounds to the chest and abdomen.
So, almost two years after Sandy Hook, what has been accomplished?
The Hartford Consensus
In the period following Sandy Hook, the American College of Surgeons (ACS) and the FBI collaborated to respond to the ongoing threat of active shooter events by assembling a group of surgery and emergency medicine specialists. The goal was to quickly identify a plan of action to increase survival of victims of these events, using concepts and actions supported by the medical literature and by operational experience.
These recommendations were developed and presented as apolitical and achievable within the existing budgets of communities of any size. The product of this effort is the Hartford Consensus.6
The bottom-line imperative of the Hartford Consensus is that “no one should die from uncontrolled bleeding.” Citing evidence of the effectiveness of actions taken in military medicine over the past decade, the Consensus calls for a coordinated response by law enforcement, fire/rescue, EMS and receiving hospitals with the goal of controlling hemorrhage as quickly as possible.
While victims who receive immediately lethal wounds can’t be saved, as was the unfortunate case in Sandy Hook, rapid control of hemorrhage in victims of otherwise survivable wounds will have the greatest impact in total lives saved.
An acronym describing the required actions by responders at all levels is THREAT. (See Figure 1.) Each THREAT step is critical to victim survival in fast-moving active shooter or MCI incidents. These steps are: Hemorrhage control, either by prevention of further injuries or by rapid recognition and control of the subset of life-threatening hemorrhage treatable on scene; extraction and triage of victims with internal hemorrhage for prioritized transport; and definitive surgical treatment at a hospital for those victims with internal hemorrhage. 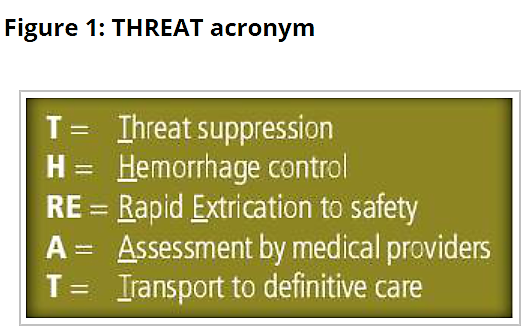 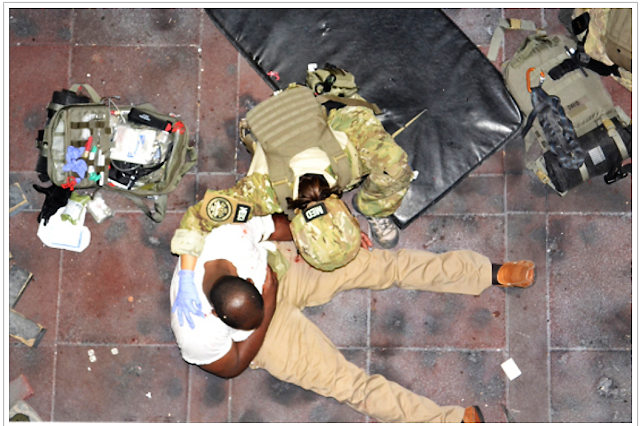