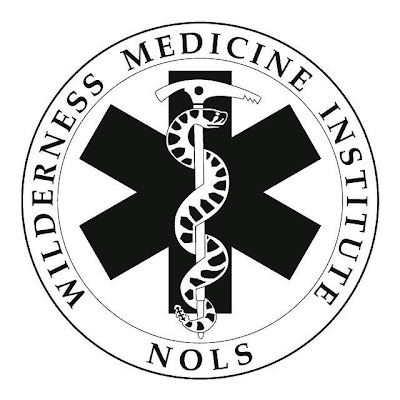 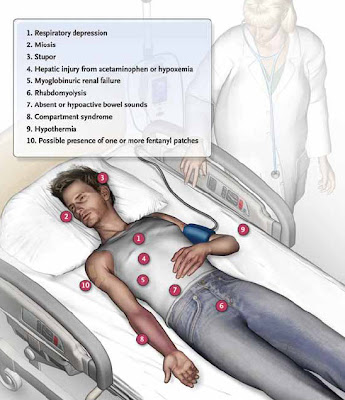 • What are the clinical manifestations of opioid analgesic overdose?
Opioid analgesic overdose encompasses a range of clinical findings. Although the classic toxidrome of apnea, stupor, and miosis suggests the diagnosis of opioid toxicity, none of these findings are consistently present. The sine qua non of opioid intoxication is respiratory depression. Failure of oxygenation, defined as an oxygen saturation of less than 90% while the patient is breathing ambient air and with ventilation adequate to achieve normal ventilation, is often caused by pulmonary edema that becomes apparent later in the clinical course. Hypothermia may arise from a persistently unresponsive state in a cool environment or from misguided attempts by bystanders to reverse opioid intoxication by immersing a patient in cold water. In addition, persons who have been lying immobile in an opioid-induced stupor may be subject to rhabdomyolysis, myoglobinuric renal failure, and the C.
• How does development of tolerance of respiratory depression compare to tolerance of analgesia?
Tolerance of respiratory depression appears to develop at a slower rate than analgesic tolerance; over time, this delayed tolerance narrows the therapeutic window, paradoxically placing patients with a long history of opioid use at increased risk for respiratory depression.

Q: What laboratory tests should be ordered in cases of suspected opioid overdose?
A: The acetaminophen concentration should be measured in all patients because of the prevalence of diversion and misuse of acetaminophen-containing opioids. Clinicians often overlook acetaminophen hepatotoxicity. Quantitative measures of drug concentrations are useless in cases of overdose because patients who have been prescribed elevated doses of opioid analgesics may have therapeutic serum concentrations that greatly exceed laboratory reference ranges. Qualitative analyses of urine for drugs of abuse (toxic screens) rarely affect decisions about patient care and have little role in the emergency evaluation and management of opioid intoxication.
Q: How should opioid overdose be treated?
A: Naloxone, the antidote for opioid overdose, is a competitive mu opioid-receptor antagonist that reverses all signs of opioid intoxication. The onset of action is less than 2 minutes when naloxone is administered intravenously, and its apparent duration of  action is 20 to 90 minutes, a much shorter period than that of many opioids. Dosing of naloxone is empirical. The effective dose depends on the amount of opioid analgesic the patient has taken or received, the relative affinity of naloxone for the mu opioid receptor and the opioid to be displaced, the patient’s weight, and the degree of   penetrance of the opioid analgesic into the central nervous system. The initial dose of naloxone is 0.04 mg; if there is no response, the dose should be increased every 2 minutes to a maximum of 15 mg. If there is no abatement in respiratory depression after the administration of 15 mg of naloxone, it is unlikely that the cause of the depression is opioid verdose. Reversal of opioid analgesic toxicity after the administration of single doses of naloxone is often transient; recurrent respiratory depression is an indication for a continuous infusion or for orotracheal intubation.
Link information
Posted by EMS Solutions International at 7/19/2012 02:33:00 a. m. 1 comentario:

Link  to Philips Save Lifes

Demo how to use and AED

Leonid Rogozov - The Surgeon Who Operated on Himself 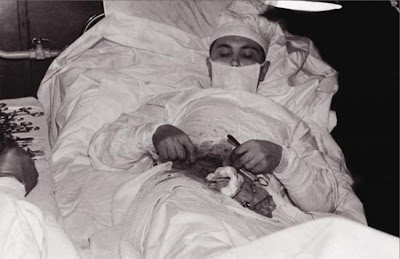 In April, 29th, 1961 a doctor of the 6th Soviet Antarctic expedition Leonid Rogozov aged 27 felt pain in a right lower belly and fever. The next day brought only exasperation. Having no chance to call a plane and being the only doctor at the station “Novolazarevskaya”, at night, in April, 30th the surgeon made an appendix removal operation on himself using local anesthesia. He was assisted by an engineer and the station’s meteorologist.


In 1959 Leonid Rogozov graduated from the Institute and was immediately accepted to the surgery clinical residency. However, his studies at the residency were broken off for some time due to Leonid’s trip to Antarctica in September, 1960 as a doctor of the 6th Soviet Antarctic expedition to Novolazarevskaya station.

During this expedition there happened an event that made a 27-year old surgeon world-famous.


In the 4th month of the wintering, in April, 29th, 1961, Leonid showed disturbing symptoms: weakness, nausea, fever and pain in a right iliac region. The following day his temperature got even higher. Being the only doctor in the expedition consisting of 13 people, Leonid diagnosed himself: acute appendicitis. There were no planes at any of the nearest stations, besides, adverse weather conditions would not allow to fly to Novolazarevskaya anyway. In order to save the sick member of a polar expedition there was needed an urgent operation on site. And the only way out was to operate on himself.


At night, on the 30th of April, 1961, the surgeon was being helped by a mechanical engineer and a meteorologist who were giving him the medical instruments and holding a small mirror at his belly. Lying half bent on the left side, the doctor made a local anesthesia with novocaine solution and made a 12cm incision in the right iliac region with a scalpel. Either watching in the mirror or by touch he removed an inflamed appendix and injected antibiotic in the abdominal cavity. In 30 or 40 minutes from the beginning of the operation there developed a faint and giddiness and the surgeon had to make pauses for some rest. Nevertheless, by midnight the operation lasting 1 hour and 45 minutes was over. In five days the temperature normalized, in two days more – the stitches were taken out.


In the St. Petersburg Museum of the Arctic and the Antarctic there is an exposure of surgical instruments that Leonid Rogozov applied for this uneasy operation.


An astronaut-pilot of the USSR, a Hero of the Soviet Union, German Titov wrote in his book “My blue planet”:

“In our country an exploit is life itself.

… We admire the Soviet doctor Boris Pastukhov, who injected himself with plague vaccine before applying it on the sick people: we envy the courage of the Soviet doctor Leonid Rogozov who made an appendix removal operation on himself in the hard conditions of the Antarctic expedition.

Sometimes I reflect upon this in solitude and ask myself if I could do the same and only one answer comes to my mind: “I would do my best…”