How to Master BVM Ventilation

Bag mask ventilation is the cornerstone of airway management.
It’s often considered a basic procedure, but there is nothing “basic” about BVM ventilation. Skill acquisition requires extensive training and experience. It’s not pretty, sexy, or glamorous. Most people perform it poorly even though it’s an essential part of good airway management.
We often relegate the skill to a new or junior provider, and when the saturation drops we attribute it to the patients’ acuity and not to failure to provide adequate oxygenation and ventilation.
The AHA recognizes that bag mask ventilation “is a challenging skill that requires considerable practice for competency.”
When performed in an emergency, respiratory failure or arrest is often imminent. Because it is a BLS skill we toss a BVM to our partner while we prepare our intubation equipment. The mask is placed on the patient’s face and ventilations are administered too aggressively or ineffectively.
When this is not recognized the airway may become flooded with gastric contents during the intubation attempt making more difficult if not impossible. Aspiration occurs, hypoxia worsens, and the patient is at higher risk of experiencing cardiac arrest.
It is not widely appreciated that BVM ventilation is often ineffective. One assumes that it works better than it actually does without appreciate education and training, which is often lacking.
Early in my career I would place the mask on the patient’s face and apply the CE technique without any objective measurement of how well it was working.
How do you Know When Ventilations are Effective?
Clinical detection of adequate ventilation is notoriously difficult. So what is the litmus test for gas exchange at the alveolar level? ETCO2 of course! 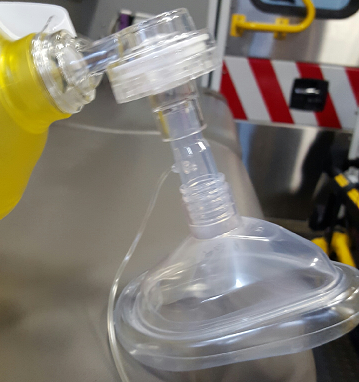 The ETCO2 sensor fits perfectly between the bag and mask.
In Emergency Medicine we want the technique that is most likely to be successful the first time. The traditional CE method is not always the best technique. Some will be quick to contest that assertion, and a few years ago I would have agreed with you.
Then I watched a video on EmCrit made by Reuben Strayer.
There are three main factors that contribute to poor BVM ventilation.
Poor Mask Seal
When using the traditional CE technique, pressure is not distributed equally across the mask. This means that when using your left hand, there is a tendency for air to leak between the mask and the right side of the patient’s mouth, which often goes unrecognized.
Improper Positioning
Because of the inherit difficulty maintaining a quality seal, and because maintaining a seal is fatiguing, the tendency is to push the mask onto the face. The mouth is then closed shut, leaving the nares as the only route of ventilation. Obstructive soft tissues of the pharynx collapse, blocking the glottic opening.
A superior technique was introduced 11 years ago in the 2005 AHA Guidelines.
“Bag-mask ventilation is most effective when provided by 2 trained and experienced rescuers. One rescuer opens the airway and seals the mask to the face while the other squeezes the bag. Both rescuers watch for visible chest rise.”
The two handed technique is sometimes referred to as the thenar eminence (TE), or “two thumbs down” technique.

The fingers are used to bring the jaw to the mask, while the palms and thumbs maintain a mask seal. This offers a mechanical advantage to the CE technique and allows better recognition of air leaks.
Gerstein (2013) compared the effectiveness of the CE and TE technique when performed by novice clinicians and found:
“The TE facemask ventilation grip results in improved ventilation over the EC grip in the hands of novice providers.”
A few weeks ago I attended a cadaver lab in Baltimore. The first skill we practiced was BVM ventilation. Our group leader has us try the CE technique first, then TE. The chest was open and lungs exposed so we could see the effectiveness of our ventilations.
Six people were in my group, and no one was able to inflate the lungs using the CE technique despite multiple attempts. However, the lungs were inflated every time, every attempt, for every person when using the TE technique!
Excessive Rate and Tidal Volume (Hyperventilation)
Even when trying to be cognizant of rate and tidal volume, there can be a huge difference in what you think you’re doing, and what you’re actually doing.
This was proven in the Milwaukee study, in which Paramedics were taught to ventilate at the appropriate rate during cardiac arrest. They retrospectively looked at the ventilation rates objectively and found the average rate was 30 breaths/min!
An excessive rate and tidal volume isn’t only deleterious for patients in cardiac arrest, but increases the likelihood of exceeding the pressure of the lower esophageal sphincter, delivering large tidal volumes of air to the stomach.
This also was mentioned back in the 2005 AHA Guidelines:

“Gastric inflation often develops when ventilation is provided without an advanced airway. It can cause regurgitation and aspiration, and by elevating the diaphragm, it can restrict lung movement and decrease respiratory compliance. Air delivered with each rescue breath can enter the stomach when pressure in the esophagus exceeds the lower esophageal sphincter opening pressure. Risk of gastric inflation is increased by high proximal airway pressure and the reduced opening pressure of the lower esophageal sphincter. High pressure can be created by a short inspiratory time, large tidal volume, high peak inspiratory pressure, incomplete airway opening, and decreased lung compliance.”

To prevent gastric inflation the airway must be kept open, and breaths delivered slowly…very slowly. Based on my observations no one delivers breaths slow enough. When your own heart rate is going 150 beats per minute, waiting 6 seconds to deliver a breath feels like forever! I often tell someone who is bagging to fast to deliver a breath every 10 seconds and even then they often ventilate too fast.
How do we slow down? Well, if the patient is intubated they could be placed on the ventilator. But since we’re talking about facemask ventilation, consider purchasing a timing light that goes on the end of the BVM, or use a metronome. You could also try counting, “one, one thousand…two, one thousand…three, one thousand…” and so on.
In addition to delivering breaths too fast, we deliver too much. The average volume of an adult BVM is 1600 milliliters! Squeezing the bag until opposite sides of the BVM touch isn’t necessary! It’s recommended that only 1/3 of the bag be compressed to give a large enough tidal volume. Any more and the pressure is too much for the rigid trachea to accommodate, and the esophagus is more than happy to accept the rest!
BVM Ventilation during Cardiac Arrest
If you’re doing 30:2 during BLS CPR you don’t have the luxury of providing breaths slowly. The goal should be to have compressions resumed within 3 seconds, and to do that the breaths can’t be given quickly or it will take 5 or 6 seconds!
The goal should be “little bag squeeze, little bag squeeze” with full release between squeezes. Intrathoracic pressure stays elevated without a full release, and we know that increased intrathoracic pressure impedes venous return.
Conclusion
References“Beginner Facemask Ventilation Techniques | Emsworld.Com”. EMSWorld.com. N.p., 2016. Web. 17 Mar. 2016.Gerstein NS, et al. “Efficacy Of Facemask Ventilation Techniques In Novice Providers. – Pubmed – NCBI”. Ncbi.nlm.nih.gov. N.p., 2016. Web. 17 Mar. 2016.“Part 4: Adult Basic Life Support”. Circulation 112.24_suppl (2005): IV-19-IV-34. Web. 17 Mar. 2016
- See more at: https://www.aclsmedicaltraining.com/blog/master-bvm-ventilation/#sthash.BnI030nn.dpuf