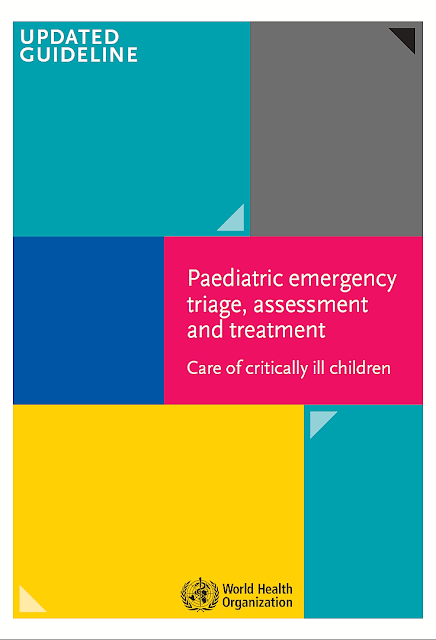 Children admitted to hospital often die within 24 hours of admission. Many of these deaths could be prevented if very sick children are identified soon after their arrival in the health facility, and treatment is started immediately. This can be facilitated by rapid triage for all children presenting to hospital to identify those needing immediate emergency care. The Emergency Triage Assessment and Treatment (ETAT) guidelines provide guidance on the most common emergency conditions in children presenting at the health facility. These include but are not limited to airway obstruction and other breathing problems; circulatory impairment or shock; severely altered CNS function (coma or convulsive seizures); and severe dehydration which require urgent appropriate care to prevent death.
The recommendations in this publication complement or update guidance in published WHO ETAT training materials published in 2005 and the 2nd edition Pocket book for hospital care for children published in 2013. This guideline however, does not cover all WHO recommendations on paediatric ETAT. It covers only those identified and prioritized by the WHO guideline development group for update in 2013. Other ETAT recommendations not covered in the current publication will be addressed in future ETAT guideline updates.
This updated guideline was prepared by a panel of international experts and informed by systematic reviews of evidence as up to 2015 and makes recommendations on three main areas:
This guideline is intended for use in low-resource settings where infants and children are likely to be managed by non-specialists. Their aim is to provide clinical guidance to these